Finally, a Bill in Congress to Fix Climate Crisis

And it needs your support 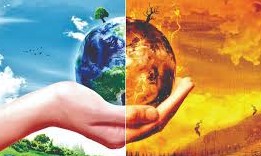 A bipartisan bill introduced January in the House of Representatives inspires hope that our children and grandchildren can be saved from what scientists tell us is an ongoing and growing climate disaster.

The evidence is incontrovertible that the climate is in crisis and that burning fossil fuels is the primary cause. A recognized global authority on climate change has warned that there is precious little time left, just 12 years, to drastically reduce greenhouse gas (GHG) emissions enough to avert the worst effects of climate change. By putting a price on carbon emissions, The Energy Innovation and Carbon Dividend Act (H.R.763) shines a spotlight directly on the hidden costs of burning fossil fuels and very swiftly reins in GHG emissions. Here’s how it would work and how it’s a win-win for the public and industry.

A steadily rising price is placed on the carbon content of fossil fuels – coal, oil, and natural gas – when they enter the economy. It starts low ($15/ton of CO2-equivalent emissions) and increases yearly by $10/ton until GHG emissions are reduced by 90 percent. The predictable increases in fossil energy prices stimulate the market-driven innovation needed to transition to renewable energy sources, all without government intervention: no subsidies and no new rules and regulations.

Consumers are protected from the expected rise in the cost of fossil fuel-based energy by returning all the money collected to American residents in equal monthly carbon dividends. Because rich and poor receive the same dividends, the majority of low and middle-income families actually break even or come out ahead, and everyone is free to spend the dividends as they please. What’s more, because carbon pricing adds nothing to government coffers, politicians on both sides of the aisle can support it.

H.R.763 is an American led global response to climate change. The bill imposes a carbon border fee on imported goods from nations which fail to impose some form of a price on GHG emissions. In addition to nudging other nations to follow suit, the border tariff enhances the competitiveness of American firms which are more energy-efficient than their global competitors. It also discourages American business from relocating to places where they can pollute more.

H.R.763 promises to reduce 2016 carbon dioxide emissions by 40 percent in 2030 and by 90 percent in 2050, according to a widely respected economic modeling firm. In 20 years, national employment should grow by close to three million jobs and over 200,000 American lives would be saved by the reduction in air pollution. The cost of health care would fall as we move away from highly polluting fossil fuels, which sicken many, especially the very young and old.

There is widespread agreement among economists, both Republican and Democrat, that pricing carbon and returning the money to consumers is the most cost-effective solution to the climate crisis. H.R.763 has already earned the backing of several societal organizations, including the Presbyterian and Episcopalian Churches, U.S. Conference of Catholic Bishops, Evangelical Environmental Network, Young Evangelicals for Climate Action, Environmental Defense Fund and Nature Conservancy.

It is widely believed that a carbon-pricing bill will pass -the only question is when. It’s up to the public to let Congress know we want action on climate change now. Please call and/or write your members of Congress and ask them to sponsor H.R.763.

And, start talking to your family, friends and neighbors about the climate crisis and this critical step toward a healthier, more prosperous and sustainable future.  Nothing short of the planet’s livability is at stake.

This entry was posted on Wednesday, March 20th, 2019 at 7:35 am and is filed under climate change, energy, global warming, green business, politics, science, sustainable living. You can follow any responses to this entry through the RSS 2.0 feed. Both comments and pings are currently closed.