Microplastics in Food, Water & Air: Can We Avoid Them?

You’re likely taking in tiny particles of plastics every time you eat, drink and breathe, according to a growing body of research into the risks to human health from the buildup of plastic debris in the environment. Although scientists haven’t yet delineated the specific harms, there’s reason enough to worry.

Microplastics (MP) result from the breakdown into ever smaller bits of everyday plastic discards, like packaging, children’s toys, and synthetic clothing and carpeting. Despite their small dimension (sometimes invisible), MP are still made of long-chain polymer molecules that make plastics resistant to bio-degradation.

Consequently, MP (both micro-particulates and microfibers) are ubiquitous now in aquatic and terrestrial ecosystems worldwide, and there’s little mystery as to why.

Since the dawn of the Age of Plastics ~1950, humans have enjoyed a love affair with single-use disposables and basically anything that can be formed from cheap polymer feedstocks. In 2018, worldwide plastics production had risen to 359 million tonnes, tripling since just 1990. Despite encouraging signs that people are starting to worry about plastic pollution – over 120 countries have banned plastic bags – global plastic production is still rising.

As of 2015, 60 percent of all plastics ever produced had accumulated in landfills or, courtesy of human negligence, the environment. MP are building up in farmland soils, lakes, oceans, and the air we breathe. Amassing of MP is seen in environs as remote as the Arctic.

It should be no surprise that MP are showing up on our dinner plates and in our poop.

To estimate annual ingestion of MP by typical Americans, Canadian scientists reviewed all studies to date on MP in drinking water (tap and bottled), beer, foods commonly consumed by Americans (sea foods, honey, sugar and table salt) and air (indoor and outdoor). Data on other major food groups were not yet available.

Applying recommended U.S. dietary guidelines, it was estimated that, through diet alone, Americans likely ingest 39,000 to 52,000 MP annually, depending on age and sex. If exposure via inhalation is included, those estimates rise to 74,000 to 121,000 MP. The most MP came from air, bottled water and sea foods. Salt, tap water and beer contributed the least.

Importantly, these figures are underestimates of total intake, given that MP in meat, dairy, vegetables and grains remain unstudied and a separate report suggesting that the greatest mealtime consumption of MP stems from airborne microfibers raining down onto our plates.

Are Microplastics Dangerous?
Large or small, plastics are carriers of dangerous chemicals either manufactured into them (i.e. building block monomers like vinyl chloride and BPA, or additives that impart desired properties, like phthalate softeners or flame retardants) or adsorbed from the surrounds because of their surface affinity for certain environmental toxins (like DDT and heavy metals). The smaller the plastic particle, the greater the surface area-to-volume ratio and capacity to attract toxic chemicals. 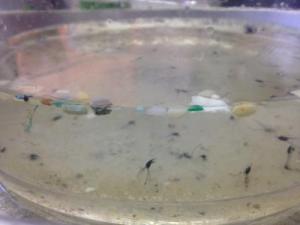 Many substances within/on plastics are known endocrine disruptors, carcinogens or mutagens. Once MP enter the food chain through uptake by creatures closer to the base, there’s potential for associated chemicals to concentrate up the chain, compounding the risks to top tier eaters like humans.

Of equal concern are health threats from inhaled MP, due to both tissue reactions to foreign particles and the leaching out of toxins. Research reveals that MP can embed in the lungs and trigger inflammatory tissue responses possibly linked to conditions like asthma, interstitial lung disease, and even cancer.

Moreover, there’s growing evidence that MP in our tissues can translocate to the circulatory or lymphatic system and reach other organs. The tinier the particle, the greater the risk of translocation. Crossings into human breast milk and fetal circulation have also been documented.

Is Avoiding Microplastics Possible?
Given that few food groups have been tested for MP, it’s unclear how personal MP exposure might be reduced via dietary choices, though the Canadian study found 23 times as many MP in bottled compared to tap water.

Because the air outdoors has fewer MP than indoor air, maintaining a well-ventilated home might reduce exposure. Vacuuming carpets frequently or replacing vinyl flooring and synthetic carpeting with hardwood and tile and avoiding clothing and upholstery made of synthetic fibers should also.

And, home air and water filtration systems are readily available that promise elimination of MP.

However, the biggest impacts you can have on global MP pollution are to say no to single-use plastics and pressure state and federal representatives to craft policies that, at all stages in the life-cycle of plastics, stem their flow into the environment.

This entry was posted on Tuesday, January 28th, 2020 at 7:17 am and is filed under diet, health, microplastics, plastics, pollution, science, sustainable living, toxics, waste. You can follow any responses to this entry through the RSS 2.0 feed. You can leave a response, or trackback from your own site.