Grabbing Some Rays or Solar Made Simple
by Sarah S. Mosko, Ph.D. 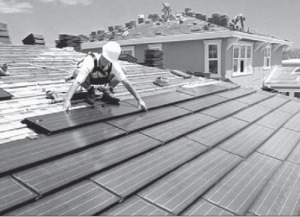 Installing solar panels on a little less than 30 million homes and businesses could power the entire nation.

There is a wellspring of hope that 2007 is the tipping point in the fight against global warming.

This is the year that the hundreds of experts on the Intergovernmental Panel on Climate Change concluded, with near certainty, that global warming is for real. It is the year Al Gore’s documentary An Inconvenient Truth turned “greenhouse gases” into an everyday household expression.

With the finger of blame pointing squarely at the reckless burning of fossil fuels, renewable energy has become the hottest of topics. Whereas renewables of every ilk will most likely fill important energy niches, solar energy dwarfs all others in ultimate potential because of the sheer abundance of sunlight.

Global energy consumption in the year 2004 averaged about 15 trillion watts (terawatts, TW), according to the U.S. Energy Information Administration. The amount of sunlight reaching the earth’s surface (120,000 TW) literally exceeds this global demand thousands of times over. In fact,

the earth receives roughly enough sunlight in just one hour to power the entire world for a full year! The trick, of course is how to capture it.

So far, the sun supplies well under 1% of the world’s energy needs. Most people are in the dark about how sunlight is being harnessed today, and what they do not understand they cannot demand in their role as energy consumers. Luckily, modern solar technologies are pretty simple to grasp — sunlight is used to either heat water or create electricity.

Solar to Heat Water: Solar hot water heaters have been around for more than a century. The earliest were bare metal ground tanks painted black and oriented toward the sun. Next, outer glass casing were added to keep heat trapped within, but water heated the day before still cooled off overnight. A revolutionary change was introduced in 1909 when thin roof-mounted water tubes were used instead to create a greater surface area for heating, plus a storage tank was located inside the house to keep water warm overnight.

Modern day systems are similar and also rely on gravity to passively transport water from rooftop to storage tank. When heating water for a pool, the pool is the storage tank. There is an added energy cost, however, since electricity is expended to pump the water between the pool and rooftop.

Florida was once home to a booming solar water industry where, by 1941, one-half of homes heated their water by the sun. However, the industry virtually disappeared in the U.S. by the 1950s as natural gas and electricity became cheap, with revivals during the oil embargoes of the 1970s when oil prices shot up. Such episodic enthusiasm for solar hot water paralleling high energy prices has been seen abroad as well, although 90% of Israeli households today enjoy water heated by the sun, thanks to a government-backed program.

In 2005, worldwide solar hot water capacity was a meager 88 billion watts-thermal. As of August 2007, legislation is pending in California that might re-jumpstart homeland interest. The Solar Water Heating and Efficiency Act (AB 1470) lays out a $250 million, 10-yr program providing rebates to consumers who install solar water heaters. The program would be paid for by a small surcharge on gas bills. The bill is opposed by the gas industry that, no doubt, foresees a fall in profits.

Solar to Create Electricity: When photons in sunlight strike a semiconductor material, electrons are dislodged and flow through the material, creating electricity. This technology is termed PhotoVoltaics (PV). The traditional method employing arrays of crystallized silicon-cell panels dates to the late 1950s when the first solar-powered satellites were launched. Contemporary commercial silicon panels have an energy conversion efficiency of 18-22% and a guarantee of high performance for at least 25 yrs.

In 2005, worldwide PV capacity totaled just 5.4 billion watts, with Germany and Japan outpacing the U.S. This figure includes both on-grid systems, where generated electricity is transferred directly to the grid, and off-grid applications where electricity is stored in on-site batteries, making connection to the grid unnecessary.

The U.S. Dept. of Energy calculated that a PV system covering a 100-sq mile swatch of sunny Nevada would suffice to power the entire U.S. Critics of PV like to point out that finding enough open space in or near a city (where demand is high), to accommodate a “PV farm” is a major impediment.

But, picture instead our national electricity needs fulfilled by individual rooftops: using the 100-sq mile figure, less than 30 million homes or businesses, each sporting a 10x10ft area of PV modules, would suffice to power the entire nation. In practice, each would function as a mini-power plant, contributing to the grid during the daytime when consumer demand peaks. And, infrastructure is already in place!

Perceived cost is probably the number one impediment to expansion of PV. Conventionally generated electricity is billed either in a tiered system (where you pay more for each kWh the more power you use) or in a time of use system (where rates go up during daytime peak-demand hours and drop at night). The high daytime rate is to pay for the energy boost supplied by so-called “peaker” plants that are powered up only during the mid-day demand peak. Southern Calif. Edison quotes seasonal daytime time of use rates varying from 36¢ per kWh in summer to a winter low of 18¢ per kWh.

Solar businesses serving Southern California estimate a 25-year amortized cost of PV in the range of 11¢ to 16¢ per kWh, based on the current system of rebates. Not only do such rates compare favorably with the price of conventional energy, they are inflation free. Furthermore, because PV generates electricity in the daytime, widespread use could obviate the need for costly peaker power plants.

Nevertheless, the up front installation price tag can be a deal breaker for average home or business owners, despite an immediate jump in property value plus the savings on electric bills.

Shifting subsidies away from oil and gas industries in favor of solar energy would go a long way to making PV more affordable. California’s new Solar Initiative, that provides consumer rebates for PV installations, is the first step in this direction nationwide.

Solar’s Future: For single home or business applications, new technologies are poised to compete with crystallized silicon PV. Thin-film coated PV shingles use similar technology and are attractive because the roofing material is flexible. However, the energy efficiency still lags behind conventional PV modules (efficiency is about 6%). Nano-solar paint, that also works much like silicon PV and might someday turn any sunlit wall into an electricity source, is under development also.

To provide electricity to an entire community, efforts are underway to perfect solar thermal technology (AKA concentrated solar power). A solar thermal plant consists of thousands of mirrors arranged to focus the sun’s energy onto a single receiver – an oil filled tube. Once highly heated, the oil becomes the heat source to run a turbine that, in turn, creates electricity. In addition to enhanced energy efficiency (about 34%), another plus is that storage is made possible by transferring some of the heat to vats of molten salt for later use, like at night. The hundreds of acres that such a plant takes up, like the world’s largest located in the Mohave Desert, remains a drawback. Nonetheless, supporters argue that electricity generated on a large scale this way will soon be competitive cost wise with that generated by conventional means.

No Time to Waste: By the year 2050, global power demand is expected to double, even when conservative estimates are used. Fossil fuels are already creating environmental havoc, and readily accessible stores are running out. Calculations reveal that even if oft discussed renewable sources (wind, biomass and hydro-power) are all tapped out, available power will fall greatly short of need. Even adding new nuclear power plants to the mix at an alarming rate will not solve the problem.

The solution to this dilemma is in plain sight, and it is non-polluting and infinitely abundant. We need to make the shift from a fossil fuel economy to a solar one. Not to do so is nothing short of madness.

This entry was posted on Saturday, September 1st, 2007 at 12:00 am and is filed under California, climate change, energy, global warming, politics, pollution, science, solar, sustainable living. You can follow any responses to this entry through the RSS 2.0 feed. You can leave a response, or trackback from your own site.