The Dirt on Laundry Detergents
by Sarah S. Mosko, Ph.D. 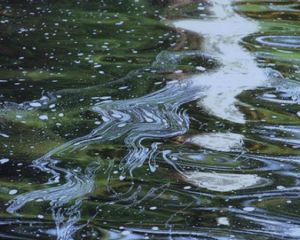 Not so clean: Human health issues arise because exposure to laundry products is continuous in most households.

As your fluffy, sweet-smelling, spotless laundry comes tumbling out of the dryer, images of oil rigs and synthetic chemical fabric residues probably never cross your mind. But today’s mainstream laundry detergents are heavily laden with man-made petro-chemicals, some representing risks to aquatic life and human health.

Historically, soaps were made by simply heating plant or animal oils with wood ashes, a strong alkali. The result is a two-ended compound called a surfactant that can rout out greasy soils because the oil-loving (lipophylic) end is attracted to oily dirt, budging it out of the fabric, while the water-loving (hydrophilic) end is attracted to the water, keeping the lifted dirt in the wash water.

A scarcity of such oils in WWII fostered the birth of synthetic laundry detergents (LDs) based instead on cheaper, petroleum-based surfactants that now dominate the market. The most common ones today are LAS (linear alkylbenzene sulphonate) and AS (alkyl sulphates).

However, this essential cleaning team – synthetic surfactants plus builders – makes up at most half the bulk of conventional LDs. A cornucopia of additives, touted to embellish the look, feel and smell of fabrics, make up the rest.

The inquisitive U.S. shopper, however, will not find a complete ingredient list on mainstream LDs since it is not required. Rather, marketing drives label contents with such promises as clothes and linens with “dazzling” whites and colors and smelling of “meadows & rain.”

In the European Union, though, new regulations forcing public disclosure of constituents of LDs prove telling. For example, Proctor & Gamble – maker of major U.S. brands like Tide and Cheer – reports roughly 40 components each in European brands on the company website “Science in the Box.” Scented dryer sheets contain close to 20. Such an eye-popping list of chemicals triggers a few questions: How safe are they? Do we really need them all?

Irritation to eyes, skin, and lungs, allergic reactions, and asthma are the most common negative reactions to LDs in sensitive individuals. The biggest culprits seem to be fragrances, dyes, optical brighteners, fabric softeners and chlorine bleach. Also, research is ongoing into possible carcinogenic and endocrine disrupting properties of common synthetic surfactants and those fragrances that contain smell-enhancing chemicals called “phthalates.”

Because LDs go down the drain, harm to aquatic life is the chief environmental concern. Science in the Box alerts us that fragrances and dye transfer inhibitors are among several common ingredients that are incompletely removed by wastewater treatment &/or resist biodegradation. Most worrisome perhaps is that common synthetic surfactants and softeners are known to be toxic to algae, fish or other aquatic life.

To whatever extent that LDs pose any risks, it’s arguably unfair to single them out since they’re only emblematic of systemic problems within American society.

The first problem is that chemicals are allowed into commerce with little or no environmental or human health safety testing under the antiquated Toxic Substances Control Act of 1976. In contrast, new European Union regulations emphasize producer responsibility in ensuring the safety of chemicals. For LDs, all constituents must be rapidly biodegradable, and some synthetic surfactants still allowed in the U.S. have been banned because of harm to aquatic life.

The other problem is the culture of consumerism that drives industry to cook up endless “indispensable” new twists on already satisfactory products to stimulate ever more consumer spending. Example: consumers have bought into the notion that clothes are not satisfactorily laundered unless they smell of synthetic perfumes and appear artificially bright by way of additives that literally trick the eye.

Yet rising eco-consciousness has ignited enthusiasm for simpler LDs that promise to deliver clean clothes while looking out for the environment and human health. Popular brands like Seventh Generation, Planet and Ecover are available at health food stores, like Mother’s Market & Kitchen, and even some supermarkets. All offer greater transparency of ingredients, boast of plant-based surfactants, biodegrade rapidly, omit additives like dyes, optical brighteners, softeners & synthetic fragrance, and claim to be non-irritating/hypo-allergenic.

However, detergents marketed as environmentally conscious are not without their critics. For example, a spokesperson for the Soap and Detergent Association – the U.S. trade association representing makers of cleaning agents – faults brands that flaunt ill-defined, unregulated marketing claims like natural, green, or eco–friendly.

Nevertheless, for shoppers who want to protect their families and the environment, less may indeed be better when it comes to LD additives, and if plant-based surfactants are effective, why not? Concentrated formulations are available too that use less and cut down on packaging waste.

Such a shift in consumer awareness is aptly expressed by the claim on Charlie’s Soap, a bare-bones, plant-based LD without perfumes and other frills that works just fine for my family: “Leaves nothing but the good old-fashioned sweet smell of clean. If you want flowers, go pick some.”

This entry was posted on Tuesday, July 1st, 2008 at 12:00 am and is filed under green business, health, pollution, science, sustainable living, toxics. You can follow any responses to this entry through the RSS 2.0 feed. You can leave a response, or trackback from your own site.