Water Down the Drain

SoCal squanders badly needed rainwater, but there are solutions

What’s wrong with this picture? Southern California (SoCal) imports about half of its water from northern California and the Colorado River while flagrantly neglecting to put precious local rainfall to use.

This misguided water policy contributes to the now threatened ecosystems of both those distant water sources as well as global climate change via the enormous energy expended in transporting water over such distances.

No wonder northern Californians are reputed to be less than enamored with their neighbors to the south.

The heavy downpours which made December 2010 one of the wettest in SoCal history serve as a reminder that, despite being semi-arid, the region’s rainfall is by no means inconsequential and might be put to better use than overwhelming sewer systems and polluting coastal waters.

SoCal is home to two-thirds of the state’s population yet receives just one-third of the rainfall and has relied on imported water for over a century. The problems this imbalance has created are now well known.

The ecosystems of the Sacramento-San Joaquin Delta and the Colorado River are both in dire straits from the demands placed on them and management shortfalls. The California State Water Project, which pumps the water some 400 miles and up 2000 feet over the Tehachapi Mountains, is the state’s single largest user of electricity and consequently a significant source of global warming-producing greenhouse gases. The National Resources Defense Council (NRDC) has calculated that “it takes up to twenty times more energy to supply water to southern California through the State Water Project as it does to supply groundwater locally.”

Water experts agree no one solution is likely to completely solve the southern region’s water supply problem. With that said, a study recently published jointly by the NRDC and the University of California at Santa Barbara (UCSB) and titled “A Clear Blue Future” outlines practical measures, collectively referred to as low-impact development (LID), which could be undertaken by homes, businesses, developers and governments to put SoCal on a better footing toward a sustainable water future.

The main thrust of LID is simple: prevent rainwater from entering storm drains by capturing and repurposing it where it lands while simultaneously replenishing groundwater aquifers.

For homeowners, LID means funneling rain gutter outflow either directly onto local landscaping, via downspouts and hosing, or alternatively into rain barrels or cisterns for future irrigation. It also means grading driveways to prevent runoff onto streets and sidewalks and choosing pervious paving materials (like bricks, tiles or permeable cement) specifically designed to foster seepage into groundwater. Businesses would do the same and could also collect cistern water for toilet flushing and install so-called “living” rooftops to further minimize runoff.

Developers would do their part by promoting water-retaining landscape designs and permeable paving.

The internet is fairly awash in information about rainwater collection systems, some do-it-yourself and at low cost. They can be as small as 50 gallons or up to 25,000 gallons for large scale applications and can pay for themselves through savings on water bills.

The NRDC-UCSB report also calls on municipalities and governments to require LID practices for new developments, redevelopments or retrofits and to offer tax incentives and/or subsidies to homeowners and businesses that adopt LID strategies. In June 2010, a first-in-the-nation ordinance took effect in Tucson requiring new commercial constructions to meet 50 percent of their landscape demand using harvested rainwater. 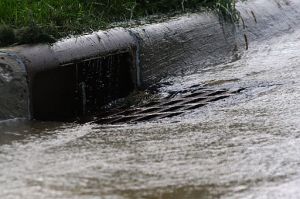 The beauty of allowing rain to percolate through soil on site is it prevents urban runoff which, according to the U.S. Environmental Protection Agency, is the greatest non-point source of water pollution. Streets and sidewalks look clean after a rain because all the oil, grime and trash gets washed into storm drains, along with synthetic fertilizers, pesticides, animal waste and bacteria from landscaping, all of which are harmful to aquatic life. Directing rainwater instead onto landscaping allows the soil to naturally filter out pollutants. What’s more, rainwater is easier on plants because it does not contain the chlorine that is added to tap water.

By raising the levels of groundwater aquifers in the SoCal region, more potable water would be made available locally for extraction and at lower cost in terms of both money and energy. And, together with rainwater collected for irrigation, the demand placed on imperiled, far-away water sources is eased.

Lest anyone think SoCal does not get enough rain to make harvesting it worthwhile, consider that most cities in the area average between 10 and 17 inches of yearly rainfall spread out over about 33 days, and just one-half inch of rain on a 1000 square foot roof could yield over 300 gallons of water.

Consider also the NRDC-UCSB study’s estimate that implementation of LID practices in California could, by 2030, save 1,225,500 megawatt hours of electricity each year, enough to power well over 100,000 homes. Similarly, relying less on water from energy-intensive sources, like northern California or desalination, could reduce annual atmospheric emissions of carbon dioxide by over 500,000 metric tons, an impact equivalent to eliminating nearly 100,000 cars per year.

A sobering article in the Los Angeles Times on January 14 reminds us that, despite the record rainfall of late, the Pacific Ocean is nevertheless in the grip of powerful La Niña conditions which generally portend an extra dry winter for SoCal. Whether or not the rest of the season will be as dry as some meteorologists are predicting, the pressure to locate more potable water will be increasing in the future as a result of population expansion. The U.S. Census Bureau is predicting that populations in the region’s already four largest counties – Los Angeles, San Diego, Orange and Riverside – will by 2050 have swelled by anywhere from 32 to 122 percent.

Simply harvesting rain could go a long way toward helping all SoCal cities reach the 20 percent per capita reduction in urban water consumption by year 2020, as mandated in the Water Conservation Act of 2009 enacted by then Governor Schwarzenegger.

Tiered water rates, where water guzzlers pay more for their greater consumption, are becoming commonplace because they foster conservation by pinching consumers in the pocketbook for the wasteful practices ratcheting up their water bill. As example, turf grass (lawns) is California’s largest irrigated “crop.” The Metropolitan Water District of SoCal estimates that up to 70% of residential water use is for irrigation which could be scaled way back by replacing lawns with drought-resistant plants.

Conscientious parents teach their children personal responsibility through the idiom “Waste not, want not” and the wisdom of savings accounts and living within one’s means. So too, we southern Californians can take more responsibility for our water consumption through efforts to capture and make good use of the precious allotment nature blesses us with, free of charge.

Turning off the water while brushing our teeth, no matter how well intended a gesture, is not near enough.

This entry was posted on Saturday, January 22nd, 2011 at 7:28 am and is filed under California, global warming, Orange County, pollution, sustainable living, waste. You can follow any responses to this entry through the RSS 2.0 feed. You can leave a response, or trackback from your own site.

2 Responses to Water Down the Drain