Is Your God an Environmentalist? 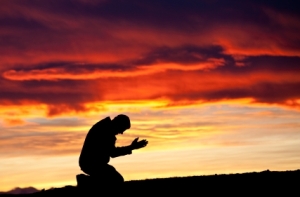 The presidential campaign season is in full swing and, like it or not, most candidates are pretty much in-your-face touting their religious faith as an essential qualification for office.

Though the candidates may spout, unsolicited, how their faith shapes their stances on many political hot potatoes, like women’s reproductive rights, gay marriage and even the economy, there’s nary a one talking about what their religion calls on them to do to fix all the environmental woes the nation and planet are facing: species extinction, toxic chemical pollution, global climate change and deforestation, to name a few.

In fact, candidates are largely steering clear of talking about the environment at all. Does this mean that religious traditions are silent on the responsibility of the faithful to protect the environment? Hardly.

For the first time in history, leaders of five major world religions (Buddhism, Christianity, Hinduism, Judaism and Islam) gathered in 1986 at the United Nations to unite in developing a means to inform North American congregations about the serious environmental problems facing life on Earth. The result was a formal pronouncement from each faith tradition declaring how its followers are called upon to care for nature.

Excerpts from these so-called “Assisi Declarations” are reproduced below. Other religions, includingBahá’í, Jainism and Sikhism, subsequently issued similar declarations.

. . . As we all know, disregard for the Natural Inheritance of human beings has brought about the danger that now threatens the peace of the world as well as the chance to live of endangered species. Such destruction of the environment and the life depending on it is a result of ignorance, greed and disregard for the richness of all living things. This disregard is gaining great influence. If peace does not become a reality in the world, and if the destruction of the environment continues as it does today, there is no doubt that future generations will inherit a dead world. . . . We are the ones with the responsibility and the ability to take steps of concrete action, before it is too late.
His Holiness the Dalai Lama

. . . But it is especially through man and woman, made in the image and likeness of God and entrusted with a unique dominion over all visible creatures, that the Lord’s goodness and providence are to be manifested . . . , man’s dominion cannot be understood as license to abuse, spoil, squander or destroy what God has made to manifest his glory. That dominion cannot be anything else than a stewardship in symbiosis with all creatures. On the other hand, his self-mastery in symbiosis with creation must manifest the Lord’s exclusive and absolute dominion over everything, over man and over his stewardship. At the risk of destroying himself, man may not reduce to chaos or disorder, or, worse still, destroy God’s bountiful treasures. . . .
Father Lanfranco Serrini
Minister General, OFM Conv.

. . . The Hindu tradition of reverence for nature and all forms of life, vegetable or animal, represents a powerful tradition which needs to be re-nurtured and reapplied in our contemporary context. . . . What is needed today is to remind ourselves that nature cannot be destroyed without mankind ultimately being destroyed itself. With nuclear weapons representing the ultimate pollutant, threatening to convert this beautiful planet of ours into a scorched cinder unable to support even the most primitive life forms, mankind is finally forced to face its dilemma. Centuries of rapacious exploitation of the environment have finally caught up with us, and a radically changed attitude towards nature is now not a question of spiritual merit or condescension, but of sheer survival.

Let us declare our determination to halt the present slide towards destruction, . . .to reverse the suicidal course upon which we have embarked. Let us recall the ancient Hindu dictum – ‘The Earth is our mother, and we are all her children.’
Dr. Karen Singh
President, Hindu Virat Samaj

. . . The encounter of God and man in nature is thus conceived in Judaism as a seamless web with man as the leader, and custodian, of the natural world. Even in the many centuries when Jews were most involved in their own immediate dangers and destiny, this universalist concern has never withered. . . . Now, when the whole world is in peril, when the environment is in danger of being poisoned and various species, both plant and animal, are becoming extinct, it is our Jewish responsibility to put the defense of the whole of nature at the very center of our concern. . . . , man was given dominion over nature, but he was commanded to behave towards the rest of creation with justice and compassion. . . .
Rabbi Arthur Hertzberg
Vice President, World Jewish Congress

Unity, trusteeship and accountability, that is tawheed, khalifa and akhrah, the three central concepts of Islam, are also the pillars of the environmental ethics of Islam. They constitute the basic values taught by the Qur’an. It is these values which led Muhammad, the Prophet of Islam, to say: ‘. . . The world is green and beautiful and God has appointed you his stewards over it.’ . . . We often say that Islam is a complete way of life, by which it is meant that our ethical systems provide the bearings for all our actions. . . . They furnish us with a world-view which enables us to ask environmentally appropriate questions, draw up the right balance sheet of possibilities, properly weigh the environmental costs and benefits of what we want, what we can do within the ethical boundaries established by God, without violating the rights of His other creations. If we use the same values . . . as we do to know ourselves as Muslims – those who subject themselves to the Will of God – then, I believe, we will create a true Islamic alternative, a caring and practical way of being, doing and knowing, to the environmentally destructive thought and action which dominate the world today.
Dr. Abdullah Omar Nassef
Secretary General, Muslim World League

Atheists, agnostics, naturalists, rationalists, secularists and other nontheists are often grouped together as “humanists” when discussing their ethical code which derives outside the sphere of religious doctrine. The American Humanist Association has long been a voice for humanists and, within its “Humanist Manifesto,” has this to say about man’s responsibility for the health of the planet, lest one assume that only the religious feel thus obligated.

. . . Humanism is a progressive philosophy of life that, without supernaturalism, affirms our ability and responsibility to lead ethical lives of personal fulfillment that aspire to the greater good of humanity. . . . Humans are an integral part of nature, the result of unguided evolutionary change. . . . Humanists ground values in human welfare shaped by human circumstances, interests, and concerns and extended to the global ecosystem and beyond. . . . We work to uphold the equal enjoyment of human rights and civil liberties in an open, secular society and maintain it is a civic duty to participate in the democratic process and a planetary duty to protect nature’s integrity, diversity, and beauty in a secure, sustainable manner. . . .

The Assisi Declarations reveal a clear consensus among the world’s major religious traditions that, no matter how spiritualism or a higher power might be conceptualized, being a good steward of the environment is deemed a fundamental article of faith. So for people of faith (and humanists too), the question that begs to be asked is this: Are you a practicing environmentalist, and what about your presidential pick?

The Orange County Interfaith Coalition for the Environment, a local non-profit, offers a venue for members of all faiths to unite in raising awareness and empowering people to actively protect and preserve creation through responsible stewardship (www.OCICE.org).

This entry was posted on Friday, March 9th, 2012 at 8:16 am and is filed under sustainable living. You can follow any responses to this entry through the RSS 2.0 feed. You can leave a response, or trackback from your own site.

5 Responses to Is Your God an Environmentalist?