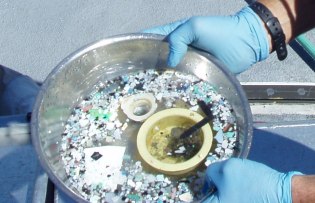 Imagine using a thimble to empty a bathtub, with the faucet still running. That’s how experts on ocean plastics pollution generally see schemes focused on extracting the debris from the open ocean instead of strategies to prevent plastic waste from getting there in the first place.

Interest in methods to rid the oceans of plastic debris is motivated by very real threats to the entire ocean food web. The “North Pacific Garbage Patch” is the most studied of the five subtropical gyres, gigantic whirlpools where waste is picked up and concentrated by slow-swirling currents. There, plastic debris already outweighs zooplankton, tiny creatures at the base of the food web, by a factor of 36:1, according to the latest trawls by the Algalita Marine Research Institute in Long Beach, CA.

Conventional plastics do not biodegrade on land or in water, but become brittle in sunlight and break apart into ever smaller bits of plastic, still containing toxic substances introduced during manufacture – like phthalates, bisphenol-A and flame retardants. Plastics also attract and concentrate persistent oily pollutants present in seawater. So plastic debris not only threatens sea creatures through entanglement or by clogging their digestive tracts, but also introduces dangerous chemicals into the food chain.