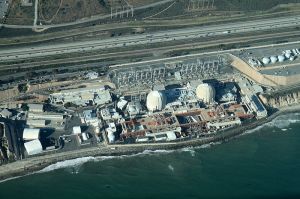 The seaside nuclear reactors at the San Onofre Nuclear Generating Station in San Clemente were permanently shut down in 2013 following steam generator malfunction. What to do with the 3.6 million pounds of highly radioactive waste remains an epic problem, however, pitting concerned citizens against Southern California Edison, the California Coastal Commission and the Nuclear Regulatory Commission (NRC). Edison operates San Onofre, the Coastal Commission is charged with protecting the coastline, and the NRC is responsible for long-term storage of spent nuclear fuel and protecting the public.

The Problem
A reactor’s spent nuclear fuel must be stored safely for 250,000 years to allow the radioactivity to dissipate. San Onofre’s nuclear waste has been stored in containers 20 feet under water in cooling pools for at least five years, the standard procedure for on-site temporary storage. Long-term storage necessitates transfer to fortified dry-storage canisters for eventual transportation to a permanent national storage site which, under the Nuclear Waste Policy Act of 1982, the federal government is under obligation to construct.

However, the plan to build an underground repository at Yucca Mountain in the Nevadan desert was ditched in 2011 out of concern that deep groundwater could destabilize the canisters, leaving the United States with literally no plan on the horizon for permanent storage of nuclear waste from San Onofre or any other of the country’s nuclear power plants. In fact, under the NRC’s newest plan – the so-called Generic Environmental Impact Statement – nuclear power plant waste might be stored on-site forever.

Given this, informed southern Californians are up in arms about the 2015 permit by the Coastal Commission allowing Edison to build a dry-storage bunker right at San Onofre – near major metropolitan areas and within a few hundred feet of both the I-5 Freeway and the shoreline in a known earthquake zone – using thin-wall canisters never proven safe for storage or transport (Coastal Development Permit No. 9-15-0228). Most other countries, including Germany, France, Japan, Russia and Australia, utilize thick-wall canisters with time proven safety technology.

The Current Plan
The dry-storage plan OK’ed by the Coastal Commission is the Holtec Hi-Storm system: cheaper canisters with 5/8-inch thick stainless steel walls, wildly short of the 10 to 20-inch thick-walled ones used in other countries. Each of 72 remaining canisters slated to be converted from wet to dry storage will contain about 50,000 pounds of nuclear waste and as much radiation as was released from Chernobyl.

Holtec canisters are about 25 feet high with walls less than an inch thick.

At the controversy’s core is the susceptibility of Holtec canisters to cracking, which could leak radiation into the environment, both land and sea. Seawater seepage into canisters can produce explosive substances.

Holtec canisters have no seismic rating, are not proven safe for transport, and there is no means to even inspect them for cracks or for existing cracks to be repaired in a safe manner. A crack can’t even be detected until after a radiation leak has occurred.

The Coastal Commission acknowledges these issues but is allowing Edison 20 years to hopefully come up with a solution.

In the meanwhile, loading into dry-canisters already began in December, 2017 and is scheduled to be completed by 2019. Furthermore, Edison plans to empty the cooling pools once the dry transfer is completed, eliminating the only approved method to replace a defective canister.

A highly disturbing report from Sandia National Laboratories states that a crack in a hot canister can penetrate the wall in under 5 years. Notwithstanding, Holtec’s 25-year warranty of their canisters is an absurdity given that nuclear waste radiation takes thousands of years to reach safe levels.

There is also no community evacuation plan in place in the event of radiation leakage at San Onofre. The fear is that failure of even one canister could leave Orange and San Diego counties an uninhabitable wasteland for eons, with exposed humans suffering permanent genetic damage. And, home and business insurance doesn’t cover losses due to radiation contamination.

The very real specter of radiation havoc from a terrorist bomb attack launched from an offshore boat or a truck on the I-5 Freeway looms as well.

In the minds of many, the reckless plan allowed by the NRC and endorsed by the Coastal Commission and Edison creates imminent risk of a “Fukushima” in South Orange County.

The Solution
A lawsuit filed by the San Diego watchdog organization Citizens Oversight in 2015 asserted that the Coastal Commission failed to adequately consider both the special risks of on-site storage in an earthquake zone next to the ocean and the shortcomings of the Holtec system. In a court settlement just reached on Aug. 25, 2017, Edison agreed to hire a team of experts in hopes of locating an alternative temporary storage site. Edison also agreed to develop a plan for dealing with cracked canisters, though there is no assurance that such a plan is feasible for Holtec canisters.

Though the settlement plan appears a first step toward a saner solution to San Onofre’s nuclear waste problem, the obligations in the plan are far too vague to assuage the concerns of local residents. Their main points are threefold: There are other safer temporary storage sites inland that can be considered; maintaining the cooling pools is imperative until all nuclear waste has been moved off-site; and Holtec canisters should be abandoned in favor of thick-wall options that already have a 40-year track record of safety during both transport and storage in countries across the globe.

Case in point, the thick-wall canisters in place at Fukushima survived both the earthquake and the tsunami.

Take action to protect yourself and your family by signing on to a petition from PublicWatchdogs.org to revoke the Coastal Commission’s permit to turn San Onofre into a nuclear waste dump.

This entry was posted on Friday, December 29th, 2017 at 8:21 am and is filed under California, energy, health, Orange County, politics, science, sustainable living, waste. You can follow any responses to this entry through the RSS 2.0 feed. You can leave a response, or trackback from your own site.